Pitot-Static tester / AoA tester
AoA testing has never been so easy
The ADSE 744 is the newest of our broad range of pitot and static testers.
This Air Data Test Set was specifically designed for the new-generation pitot tubes that integrate sensing probes, pressure sensors and powerful air data computer processing to provide all critical air data parameters including pitot and static pressure, airspeed, altitude, and angle of attack. This pitot static tester is designed primarily for flight line use to cover the testing of all barometric and manometric pressure instrument systems.

The AoA (Angle of Attack) channel behaves as a second Ps channel, in order to create a differential pressure between the 2 Ps channel, allowing it to perform simulations of different angles of attack. The large touch screen display, with on-screen help, enables all checks to be carried out easily on the flight deck or in the cockpit, by a single operator. The ADSE 744 is robust and housed in a mobile weatherproof case. An attached bag contains the pressure hoses and electrical cables.
Wide choice of pneumatic connectors available upon request.

The ADSE 744 is designed to perform Pitot and Static port tests on all aircraft types, including civil, military, fixed and rotary-wing aircraft and is designed primarily for Flight line use, to test all barometric and manometric pressure instrument systems.

Designed for the operator

The ADSE 744 has been designed to simplify pressure tests on the equipment fitted on the aircraft (altimeter, airspeed indicator, rate of climb indicator, air data computers…) either in the workshop, the hangar or directly on the tarmac. Thanks to the complete range of channels, the operator can isolate the various circuits without leaving the cockpit. In addition, the Angle of Attack (AoA) Channel behaves as a second Pt channel to create a differential pressure, allowing the user to perform the simulations.

The ADSE 744 is supplied with a wired or WiFi connected colour touchpad to give greater freedom to the operator. The user will manage the tests by manual input or use the pre-defined test sequences that can be programmed in the ADSE 744. As confirmed by many existing users, the HMI has been designed to be user-friendly, efficient and as straightforward to use as possible.

Designed to evolve into a diverse environment

The ADSE 744 Pitot Static Test Set is housed in a very rugged, weatherproof mobile box, designed to be taken directly to the aircraft, on the tarmac or in the hangar, to perform “in situ” tests on the aircraft equipment. The ADSE 744 allows the operator to carry out testing, even in complex working environments.

The Remote-Control Unit (RCU) can be connected via WiFi or cable to suit the working environment and the operator’s needs. The RCU is a Tablet PC fitted with a watertight touch-sensitive screen displaying the static (Ps) and total (Pt) pressure parameters and gives the operator greater flexibility to move around the aircraft during the test. Power to the ADSE 743 can be from 90/240V AC, from 50 to 400Hz. 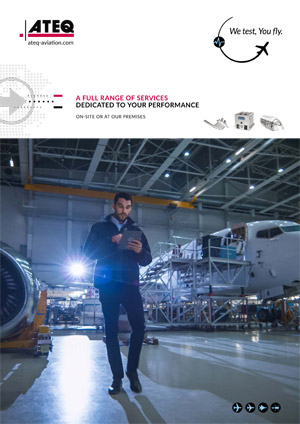